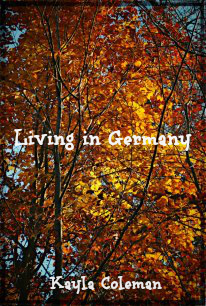 My new book/ blog? I am starting. I will be posting the story by chapters on here. I suppose they will just be like "blog entries?" Should I do that or not? Opinions, please!


Here is the first part of it, part of the entry that I submitted in Scholastic that I got Silver medal on, and entered in Germany Ja, that I get to write a column about now :)

I swear only the Seidlung is blanketed in fog and darkness during late fall and early winter. It’s trying to push us out into the world that surrounds us, but I have a feeling I am the only one that notices. We move here to a culture and place that is definitely not like America. Almost any American who has moved here stays submerged in the culture we know best and feel at home with. They all (we all) just stay locked up in our American neighborhood in Germany that speaks only English.
I always have the urge to venture outside of this American prison hold, even though I can’t that often, when I do, it is the most amazing place I have ever seen (not many places). It feels like I am one of those girls in those movies where they move to the French countryside or just live the perfect life in some little European town. How amazing it feels when I see the places that I had only seen in books or magazines, it makes me feel like I have lived there my whole life.
Besides in the winter where all you can really do is visit Weinachtsmarkts (Christmas markets; I will get to later) there is spring and summer. I have only lived here long enough to see one spring season but it was more beautiful than I had ever seen in the states. The feeling of being trapped in the cold sharp air for six months begins to feel like ten years; suddenly disappears when the hundred different colors of blooms appear right before your eyes. But only a few take enough time out of their life schedule to recognize and cherish the beautiful beginning of summer, like me.
As summer approaches, I would do anything to live in the countryside or just plant myself right in the middle of one of the vineyards and never move again. The smell of the rain here is so clean and fresh; I would stand outside in it just to smell it. And when the evenings are here, the sun turns into beautiful shades of reds, oranges, pinks, yellows, and purples, tidying the sky. I had to watch a dog for a friend one week and the dog had to go to the bathroom at least 8 times a day, and we live on the third floor so I would have to walk it all the way down and out. But in the evenings there was no hesitation from me. The dog was my excuse to go outside when it was quiet and peaceful, watching the last rays of the sun melt beyond the horizon. The smell of the fresh cool night air would rush in and I would be blanketed under a million white stars. Soon enough the lights on the radio tower (what we called the sky pointer of Germany) would turn on its pink and green communication lights and would glow like a spaceship. What I would give to have summer back now.
Fall happens right before your eyes, and it is gorgeous. I experienced my second fall in Germany and I was in love: the bright beautiful colors of the leaves on the trees. It started with just yellow, then orange appeared and bright reds that were the color of fresh blood. The leaves fall only slowly at first, here and there, and the warm air still comforts you. But as soon as the first cold day appears, they do not stop, and the leaves plummet to the ground in one night.
We woke up one day and one specific species of trees dropped all of their leaves, every tree, dropped their still green leaves and there were enough to make leaf mountains! Piles that would cover even the tallest man on Earth. (Exaggeration I believe) And it is just magnificent all of the colors. If you were to drive into Oberursel to Frankfurt International School, forests and trails around and through surround it. It’s beautiful to just look out the window during school. Luckily for the mile runs in gym class I get to enjoy nature’s beauty and not an asphalt track. If you were to ride up there in the month of October before it starts to freeze, the whole forest(s) are bright paint pallets of colors. So photo-perfect. The greens still barely there, hiding behind the marvelous shades of reds, and pumpkin oranges to dull squash yellows. It is a sight to stand and breathe in its wonders.
Winter is right around the corner as soon as fall appears. That’s the sad part; that fall is so short and winter comes so soon. Although even in early winter most of the leaves on the trees are still there, the once bright variety of colors that still remain are now dull and ready to fall to the earth. As the middle of November and December come, the nights get even colder and the snow is here (hopefully) but if you were to go up more into the hills like in Oberursal there is always more snow. Now the snow blankets the dead tree branches and the ground.
Walking through the forests here is like walking through the forests at the beginning of the Chronicles of Narnia movie once the kids step out of the wardrobe. You can’t help but feel like it is a winter wonderland truly. I suppose I love trees because there was not many in Colorado and only in the mountains in Montana. But trees are important to this world (that is why you should not kill them) they are good for Oxygen which is healthier breathing, and its good for habitats for animals (which you should not kill either unless needed) and the last thing is their beauty, they add color and dimension to this dull world.

Entry:
November 4, 2012, is the date today. And it is winter. Although winter came way before it was called upon. Way before. We had our first snow in October! Only October. The strangest thing here in Germany is the weather. The last year 2011 in downtown Frankfurt we got one day of snow that was about one inch. That was it, and in 2010, there was a record snowfall of about five feet! Then this year in 2012 the first snow is already in October, although so far that has been the only snow. The days are shorter now, and colder. Definitely. Seeing all of the beautiful fur coats and fancy coats in the shops really make me wish I owned one, but I do love my fifteen-dollar Esprit winter jacket.

I say the sun that never sets, but I suppose it should be more like the heat that never ends. This endless death wave was not part of my current/near future plan. Don't get me wrong, the sun is gorgeous when it shines here, but when you can feel the sun and concrete burn through your sneaker into your feet, that can't possibly feel "fantastic". I thought that I would share a few things with you before bringing up my writing, so here it goes. I don't mind Arizona. It is definitely better than I thought it would be, but the summer weather is too much for me here (I decided that 100 degrees is now my limit), and I have yet to meet a single person my age. That might be due partially to the fact that we still live in a hotel while we unexpectedly renovate our house (a whole other story for another time), and also partially because I haven't put myself into any situations yet to meet any kids my age (other perhaps a clerk or two at the grocery stores). In other wo…
Post a Comment
Read more

As I sit on the balcony of the Fairweather Inn, built in 18- something or other, overlooking the small main street of Virginia City Montana, I can’t help but want to throw a rock through the windshield of the cardinal red Subaru across the street with its alarm going off ever forty-five seconds. The terrible thing is that the owner has to be aware that their car alarm is going off because once it starts, it last between two and thirty seconds and then is shut off, and will either start back up within two to five seconds- so where is my peace and quiet? I surely thought that I would find it here, but apparently not. With that aside, a cold and numbing breeze sweeps across the balcony and down the sloped street as a light rain begins to turn into a downpour. I have missed the fresh and renewing smell of rain in Montana though. It is odd to say, but it certainly isn’t the same elsewhere in the world- especially not in Phoenix Arizona where every time the skies open to a downpour, the onl…
Post a Comment
Read more

Well, for those of you reading on here, this news may be coming out of the deep blue, but today is officially publishing day for the new edition of The King's Daughter! Published this evening, about ten minutes ago, (so it will take a little time to actually show up online... but), my book will be available on Amazon and Barnes&Noble in print, and will be available as an e-book within a few weeks when I finish up the formatting! I finally thought it about time to stop fussing over the small things (because I knew it'll never be "done" to me if I keep trying to fix minute details). I'm excited to share this newer version with my family and friends who've always shown such great love and support towards my writing over the years! I've come a long way, but know that I still have a long way to go, and The King's Daughter is just my first stop on that long journey! Publishing this will allow me the time now to give more of my time and attention to wor…
Post a Comment
Read more