Use a Little Imagination

September 27, 2015
As I ease myself into a somewhat regular routine now, I find myself slowly raking through both KD and Serpahina to check small details and rewrite parts I no longer care for (at this rate, I realize I will never finish the books :P ). Have no fear though, I will finish them. The more exciting thing I wanted to share though, is an aspect of Seraphina which is rather new (and still being developed), but I thought was a really fun thing to do. I created a whole written language for Seraphina! Well actually, I created two... Although they are currently only written languages (because I haven't worked out quite yet how they'd sound spoken aloud), I was able to let my imagination run a little wild to create the symbols for the one of the two.

First we have Vellen. Vellen is the language of the magicians in Seraphina, used in both the teaching and actual use of magic. In a way, speaking the language while using magic can help heighten the connection between the individual and the magic realm, to increase the strength of the magic they use (however, there is a certain extent). Even the strongest magicians known at the present time in the book, haven't ever been able to use magic to shape-shift, teleport, or even steal/give other magicians' magic. The magicians and their strengths are sort of ranked (still working out the kinks and finer details), by their abilities.

Warriors: Are taught basic magic skills, along with how to use magic in combat (using it to heighten their senses, to give them extra strength, etc.)

Healers: Are taught basic magic skills, along with how magic affects the human body, and how to use it to help the body mend (they have to be excellent with Control.)

Alchemists: Have further teachings than both Warriors and Healers because their jobs take a lot more mental strength and ability than the others. There are few Alchemists from the Academies, and of those few, even less have the ability to complete things like elemental transmutation.

Master Magicians: Master Magicians are rare. You can have masters in every one of the three fields of magic (Master Warrior, Master Healer, Master Alchemist), but in order to be a Master Magician, you must have completed or succeeded in showing strength in all three categories. I say this is rare because generally after two years of learning basic magic, the young magicians of the Academy choose which field they will enter (one of the three). This, of course, is based on how well they did in each of their different lessons. A student who excels in all three areas, may be chosen to study under an already Master Magician, to further studies in all three. This takes both a lot of physical and mental strength from the magician. If, after three years the student has succeeded in passing the "master" test for all three guilds, then they become a Master Magician.

Vellen isn't the only language of magic though. There is also Vellener. Vellener is much like Latin, in the sense that it is a "dead" language, or much like Old English, where Modern English evolved from it- Vellen evolved from Vellener. Vellen uses the people's modern alphabet (which is the English alphabet + 4 letters) (and a key to translate work by word and letter by letter). Vellener on the other hand, is a language using an alphabet I created (much like symbols) (you have to convert a single word from english to Vellen, and then Vellen to Vellener using a key in order for it to translate properly). Very VERY few people of the "modern world" are able to understand the ancient texts written in Vellener, or even use the language to enhance their magic because they either don't understand it, or aren't strong enough. Only natural magicians can speak Vellener and use it to enhance their magic. Now you see, natural magicians are super rare... practically legends. I say this because natural magicians are the strongest of all magicians. They don't have to be taught how to use their magic because it comes to them naturally unlike taught magicians who are tested for magic, and then placed in the Academy to learn how to draw on it and use it.

I hope this makes at least a little sense to you.... Even if it doesn't I suppose it's more for me to sort things out in my mind by writing them down. That way I can see where to explain things a little more concise. :)

With all of this said, what I really wanted to do was show some pictures of the languages as I've been working on them! Let me know what you think. ;) 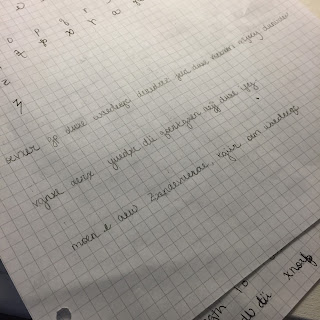 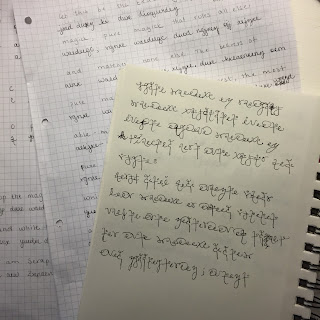 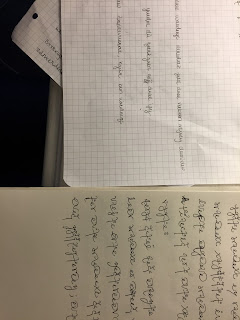 (^ Shows the difference between Vellen -top- and Vellener -bottom-)

July 15, 2015
I say the sun that never sets, but I suppose it should be more like the heat that never ends. This endless death wave was not part of my current/near future plan. Don't get me wrong, the sun is gorgeous when it shines here, but when you can feel the sun and concrete burn through your sneaker into your feet, that can't possibly feel "fantastic". I thought that I would share a few things with you before bringing up my writing, so here it goes. I don't mind Arizona. It is definitely better than I thought it would be, but the summer weather is too much for me here (I decided that 100 degrees is now my limit), and I have yet to meet a single person my age. That might be due partially to the fact that we still live in a hotel while we unexpectedly renovate our house (a whole other story for another time), and also partially because I haven't put myself into any situations yet to meet any kids my age (other perhaps a clerk or two at the grocery stores). In other wo…
Post a Comment
Read more

May 23, 2017
As I sit on the balcony of the Fairweather Inn, built in 18- something or other, overlooking the small main street of Virginia City Montana, I can’t help but want to throw a rock through the windshield of the cardinal red Subaru across the street with its alarm going off ever forty-five seconds. The terrible thing is that the owner has to be aware that their car alarm is going off because once it starts, it last between two and thirty seconds and then is shut off, and will either start back up within two to five seconds- so where is my peace and quiet? I surely thought that I would find it here, but apparently not. With that aside, a cold and numbing breeze sweeps across the balcony and down the sloped street as a light rain begins to turn into a downpour. I have missed the fresh and renewing smell of rain in Montana though. It is odd to say, but it certainly isn’t the same elsewhere in the world- especially not in Phoenix Arizona where every time the skies open to a downpour, the onl…
Post a Comment
Read more

October 08, 2017
Well, for those of you reading on here, this news may be coming out of the deep blue, but today is officially publishing day for the new edition of The King's Daughter! Published this evening, about ten minutes ago, (so it will take a little time to actually show up online... but), my book will be available on Amazon and Barnes&Noble in print, and will be available as an e-book within a few weeks when I finish up the formatting! I finally thought it about time to stop fussing over the small things (because I knew it'll never be "done" to me if I keep trying to fix minute details). I'm excited to share this newer version with my family and friends who've always shown such great love and support towards my writing over the years! I've come a long way, but know that I still have a long way to go, and The King's Daughter is just my first stop on that long journey! Publishing this will allow me the time now to give more of my time and attention to wor…
Post a Comment
Read more